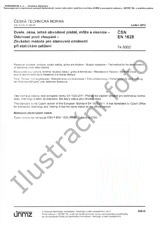 This European Standard specifies requirements for the execution i.e. the manufacture and the installation of cold-formed structural aluminium components made from profiled sheeting for roof, ceiling, floor and wall applications under predominately static loading conditions or seismic loading conditions and their documentation. It does cover products of structural class I and II according to EN 1999-1-4 used in structures. Structural elements are understood here to mean profiled sheeting, such as trapezoidal, sinusoidal, liner trays or cassette profiles (Figure 1), that are produced by cold forming. Perforated and micro profiled sheeting are also covered by this part. Welded sections are excluded from this part and are covered by EN 1090-3 except seal welding in low-stress areas. This standard also covers spacer constructions between the outer and inner or upper and lower skins as well as supporting members for roofs, walls and ceilings made from cold-formed profiled sheeting and the connections and attachments of the afore mentioned elements as long as they are involved in load transfer, it also covers connections and attachments of these elements. A combination of steel and aluminium structural elements are permitted, e.g. liner trays made of steel, stiffened by profiles made of aluminium. In this case, EN 1090-4 and this document apply. Composite structural elements where the interaction between dissimilar materials are an integral part of the structural behaviour such as sandwich panels and composite floors are not covered by this standard. NOTE: The structures covered in this standard can be for example - single- or multi-skin roofs, whereby the load-bearing structure (lower skin) as well as the actual roof covering (upper skin) or both consist of structural elements; - single- or multi-skin walls whereby the load-bearing structure (inner skin) as well as the actual cladding (outer skin) or both consist of structural elements; or - suspended ceilings for interior fitting. Figure 1 - Examples of profiled sheet